Who was Mary Magdalene, ‘prostitute’, ‘sinner’, ‘apostle of the apostles’?

We Are Church Ireland Church News Who was Mary Magdalene, ‘prostitute’, ‘sinner’, ‘apostle of the apostles’?
22 Jul 2014

Who was Mary Magdalene, ‘prostitute’, ‘sinner’, ‘apostle of the apostles’?

First to encounter the Risen Christ yet named ‘penitent’ until 1969 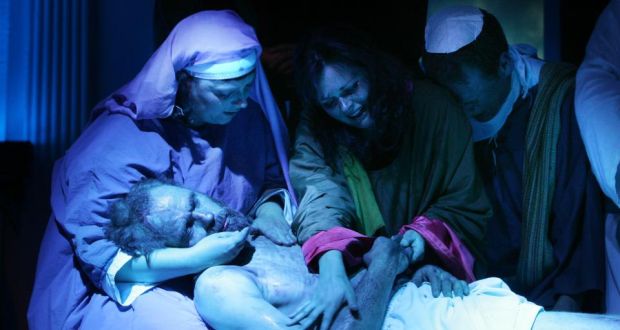 Gradually and for a variety of reasons, the memory of Mary Magdalene changed in the Western church – Actors Pascal Lacey playing the part of Jesus Christ, Margaret Walshas Mary, Eva Mulhare as Mary Magdalene ,and William Byrne, as John the Apostle during the Ballylinan Passion Play on stage at St. Annes Community Hall Ballylinan in 2010. Photograph: Alan Betson

In a recent letter to The IrishTimes on the subject of mother-and-baby homes, DrMary Mullaney wrote: “I visited the chapel [of Seán Ross Abbey] where the girls would have prayed daily.Over the altar is a stained-glass image of Mary Magdalene, the prostitute and sinner. But who was the real sinner?”

Indeed,who is the sinner? Today, July 22nd, is the feast day of Mary of Magdala, St Mary Magdalene. She is mentioned in all four canonical Gospels as discovering the empty tomb on her own or with other women disciples.

John’s Gospel also shows the Risen Christ sending Mary of Magdala to announce the good news of his resurrection to the other disciples (John 20: 10 to 18). Because of this, the early church called her “the apostle to the apostles”.

However, gradually and for a variety of reasons, the memory of Mary Magdalene changed in the western church,and became distorted from that of a faithful disciple and first witness of the resurrection to that of a repentant prostitute and public sinner.

She was identified as such in the homilies of Pope Gregory the Great in 590 AD. At a time when the plague was ravaging Europe, he emphasised penitential forms of worship as a way of warding off diseases. Mary of Magdala was assumed to be the unnamed woman of ill-repute who bathes Jesus’s feet with her tears,and whose many sins Jesus declares forgiven (Luke 7:37-50).

The Gospel’s reference to her being freed by Jesus from seven demons (an illness) became wrongly interpreted as her being guilty of the seven capital sins.

She was also identified with Mary of Bethany who anointed Jesus. The Fourth Lateran Council (1215 AD) made annual confession to a priest mandatory for all and the Council of Trent laid further stress on the sacrament of penance.

Mary of Magdala then became the supreme example of the weeping repentant sinner doing penance.

In 1570, the Roman Missal described Mary Magdalene on her feast day as “penitent” and the selected Gospel was that of the sinful woman. Nevertheless her role as “apostle to the apostles” remained acknowledged, however obscurely, as the creed was said, as on the feast days of the male apostles. In 1969, her name was cleared, the label “penitent”was removed from the Missal and her Gospel is now that of her commissioning by the Risen Christ.

The reality, however, is that for most people her name remains linked to sexual sin and her role as apostle unknown. Sunday Mass participants can go through all their life and never once hear the proclamation of Mary Magdalene’s encounter with the Risen Christ, never mind a homily on it.

Jesus’s appearance to Mary Magdalene is assigned to Easter Tuesday. Why this secondary position to a weekday? A separate account of Mary Magdalene with the other women disciples meeting the Risen Christ(Matthew 28:8-15) is also read on a weekday, Easter Monday. This is a clear example of a pattern of giving men pride of place in the lectionary while sidelining the women.

The Gospels show us a Mary of Magdala who stands out as the leader of the women disciples who followed Jesus and provided for his ministry out of their financial means (Luke 8:1-3). She was a faithful, courageous and loving witness to his crucifixion, his entombment and resurrection. She was commissioned by him and given the authority to be his public spokesperson: “I have seen the Lord and this is what he has told me.”

In 1994, I attended a papal audience with the role of women for its theme. John’s Gospel of Mary Magdalene’s commissioning by the Risen Christ was read in several languages . . . all by men.

Not one woman was to be seen or heard on the papal platform. As I witnessed this female invisibility and silence, I was struck by both its absurdity, and its telling reflection of women’s roles in the institutional church.

Like Mary Magdalene, we need to “Go and Tell!”