Cross on summit of Carrauntoohil cut down

Cross on summit of Carrauntoohil cut down 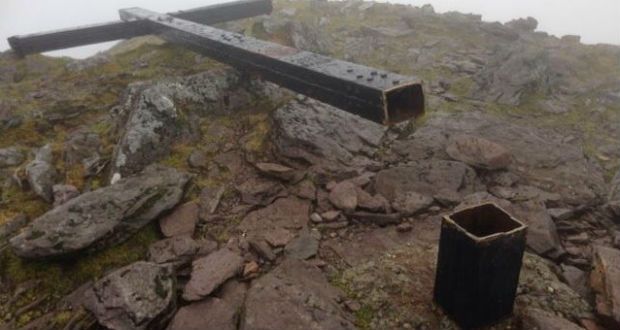 It is not known who cut down the cross on top of Carrauntoohil which was erected on the mountain in 1976 with the aid of about 100 people. Photograph: Cronins Yard/Twitter

A metal cross on the top of Carrauntoohil in Co Kerry – Ireland’s highest mountain – has been cut down, apparently with the aid of an angle grinder.

Mountain climbers found the cross a number of feet westwards from its base, towards a steep drop on the mountainside, during a climb this afternoon.

It is not known who cut down the cross which was erected on the mountain in 1976 with the aid of about 100 people. It had been assembled on the mountain top using welding machinery, and was televised at the time.

Similar crosses are in place across the State on hilltops and mountain sides from Kerry to Leitrim and east to west.

Kerry county councillor John Joe Culloty who earlier this year proposed a crucifix be hung in the council chamber in Killarney, said the cutting of the cross was a further step in the move towards “a Godless society”.

Mr Culloty said he had not known the cross had been cut down and expressed disappointment at the news. He would be doing all in his power to have the cross reinstated he said.

Mr Culloty said Christianity and Catholicism was the religion of the majority of the people and references to it were enshrined in the Constitution.

But he claimed both the Taoiseach and the President had last Christmas made speeches without reference to God, making it “very clear what is coming down the tracks”. This he explained was a reference to the State moving away from its Christian ethos and people having “to give up everything in an attempt to become secular”.

He said he saw the removal of the cross as part of a drive to “allow what is not normal and to become normal”. He said he meant abortion, gay marriage and “assisted dying” as issues which were not normal.

Mr Culloty said it was his job to promote his faith “in a respectful way” and the special place of Christianity and Catholicism would not be removed from Irish life until the people of Ireland ever choose to change the constitution and honour “the Koran” or any other religious symbol in place of the cross.