We Are Church Ireland started this petition to Pope Francis 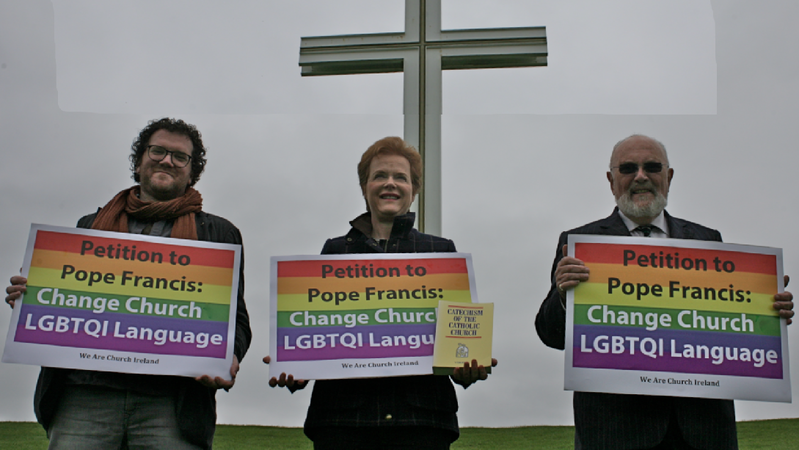 Pope Francis has said about gay people
"Who am I to judge?"
But the Catholic Catechism still refers to LGBTQI as "objectively disordered."
Would Jesus use these words?
Pope Francis is to visit Ireland 25-26 August 2018 and we are calling on him to change church LGBTQI language.

We feel it is imperative for us to boldly speak out against Catholic Church officials' continued insistence on calling the LGBTQI community’s “inclinations” as “objectively disordered” (Catechism of the Catholic Church, 2358), or even worse, “ordered toward an intrinsic moral evil” (Letter to the Bishops of the Catholic Church on the Pastoral Care of Homosexual Person, 1986). The Catholic Church’s formal language to describe our LGBTQI sisters and brothers makes the institutional Church complicit in the marginalisation of LGBTQI people. Under the guise of religion and faith, the Church models intolerance, breeds prejudices, and attempts to justify discrimination. We call on the Church to formally change its language about the countless LGBTQI people whose lives benefit the church and who are impacted by such diminishing language.

Pádraig Ó Tuama Leader - The Corrymeela Community
“As a gay Catholic, I do not recognise myself in the language used about me in the church’s documents or teachings. The gospels depict the dignity of humanity, especially those who were castigated or marginalised. The Church would be more faithful to its witness to use language that builds bridges rather than diminishes dignity.”

Ursula Halligan Journalist in Residence, DCU
"Why does the hierarchical Catholic Church continue to use such horrible language in its catechism and official documents about LGBTQI people? If a business or company were to use such language, they would be publicly reprimanded and penalised by the state. The hierarchical church needs to wash its mouth out before speaking about LGBTQI people".

Senator David Norris
As a believing and church going Christian I have to say that the history of the Christian churches in relation to gay people is a shocking record of criminality and brutality. At the instigation of the churches gay people have been routinely ostracised, tortured and murdered. It is unacceptable that there should be any continuation of the savage and insensitive language employed by some of the churches in dealing with gay people. It is salutary to remember that Jesus Christ not once mentions or condemns homosexuality.

Cardinal Luis Antonio Tagle, Archbishop of Manila, has lamented the “harsh words” that the Church used about gay and divorced people in the past, saying it left them feeling “branded”. [Flame 2 Youth Congress, Wembley, 2015]